At the beginning of September, we published Gaia’s Feasts: New vegetarian recipes for family and community by Julia Ponsonby.

This fantastic book is the follow-up to her Gourmand Award-winning first book, Gaia’s Kitchen and features yet more mouth-watering recipes. As Hugh Fearnley-Whittingstall says in the foreword to the book:

This recipe, taken from Gaia’s Feasts, cannot fail to bring a little exotic flavour to your mealtime – and it can be made with rice instead of couscous for a gluten-free alternative. 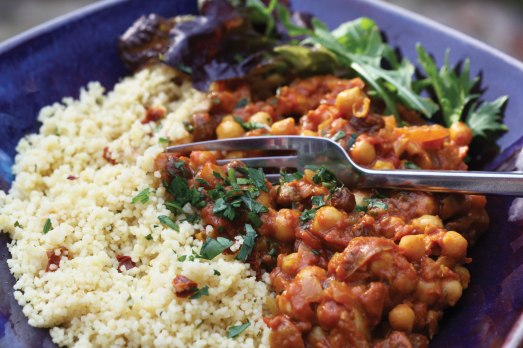 This savoury-sweet Moroccan stew takes its name from the thick earthernware pot known as a tagine slaoui that it is tradition­ally cooked in, simmering slowly over an open fire or on hot charcoal. The influence of Arab cuisine is also present in the combination of sweet and savoury ingredients that typically go into a tagine. Medieval European cookery absorbed the same influences and continued to express them in much Elizabethan fayre – food that would have been typical for many Totnesians in the 1600s, as demonstrated in the kitchen of the town’s Elizabethan museum.

At Schumacher College, we avoid the Moroccan tendency to include lamb or chicken in the dish, and instead use another typically Arab ingredient, the wholesome chick pea. Combined with dried apricots, apple, cashew nuts and many other ‘saucy’ ingredients, this makes an extremely tasty and satisfying tagine – very popular at suppertime. Serve with couscous and greens; cooked or raw.

1.     Soak the dried chick peas overnight in three times their depth of cold water. Rinse and cover with fresh water. Boil for one hour or until cooked. Reserve the cooking water to use as stock, adding in some apple juice (in the abundant juicing season!).

2.     Fry the onion and garlic in a little olive oil until soft and pearly.

4.     Spread the cashews out on a baking tray and roast in the hot oven for 10 minutes or so until they start to turn light brown. Remove from the oven and sprinkle tamari or soy sauce over them immediately while they are still hot, so that they absorb the flavour, steam off the moisture and remain crunchy!

5.     Now combine the chick peas with the sauce in a big pot. Gently bring the sauce to the boil. Season to taste with salt, freshly ground black pepper, and lemon juice and zest. The tagine mixture should be mildly spicy with an appealing sweet-and-sour aspect to it. Adjust with tamari, honey, apple juice, lemon juice or vinegar to taste. Mix in the toasted cashews just before serving, saving a few to sprinkle on the top.

6.     Measure the dry couscous into a big pan that allows plenty of room for the grain to expand. Bring the stock or water to the boil. If you haven’t any stock to hand, add stock powder or cubes to the water to flavour it. Pour the boiling stock or water over the couscous, stir and leave to stand for 5 minutes with a lid on. During this time it will absorb the moisture and soften. Stir in some finely chopped coriander at the last moment, if you like, and garnish with the rest. The couscous is now ready to serve with the tagine.