If you’ve been following Grand Designs Live, you might have been hit by inspiration to build your own home – or at least to learn more about the innovative and sustainable methods that are out there. Over the past decade hempcrete has become more and more popular as a building material, thanks to its many attributes; not only is it fireproof, healthy and breathable but it is also very thermal efficient when compared to other material. The Hempcrete Book by William Stanwix and Alex Sparrow provides a detailed study of hempcrete: its history, how to use it and some interesting examples of self builds.

“Inheriting a field with a dilapidated concrete barn on it gave Bob and Tally Moores an opportunity to fulfil what was, for Bob at least, a long-held dream of building his own house. Planning permission had been refused on the barn once, but after some detective work Bob and Tally found an old map which convinced the council that, contrary to previous opinion, the barn sat within the village boundary, and permission was eventually granted for demolition of the barn and construction of a house.

Bob is a carpenter, used to timber framing, so his house was always going to be based around a green oak frame, and having worked for a supplier of traditional and environmentally 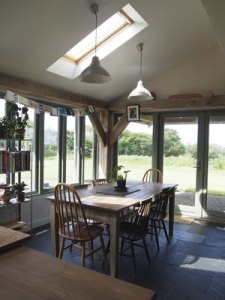 friendly building products, he was familiar with lime and other natural materials. He was doing an MSc in Sustainable Architecture at the Centre for Alternative Technology, from which he says he learnt a lot, but couldn’t understand why everyone was talking about easy-build bolt-together timber-frame houses with lightweight insulation, which needed to be sealed up tight to keep the heat in and then ventilated using mechanical systems to maintain indoor air quality. Bob says, “Up to the point when we built the house, I had lived mainly in vernacular buildings, built from local, natural materials that had stood the test of time. I wanted the same feeling of permanence from the house I was going to build myself… to know that, as well as being a high-thermal-performance eco-house, it would stand a chance of being there for centuries to come, and I didn’t think I would get that from a lightweight insulated timber-frame house.” The more Bob thought about it, the more it seemed to him that thermal mass was the key to passively storing heat, whether created by heating systems or from the sun, and slowly releasing this energy to maintain a constant comfortable temperature inside.

The final design included a green oak structural frame, with a softwood studwork frame built off this to take the hempcrete. The principles of passive solar design were followed: highly efficient glazing on the south-facing elevation and a minimum of windows on the north side, together with a good overhang so that the windows are shaded in summer but allow direct sunlight in during the winter, when the sun is lower in the sky. All the external walls are 300mm hempcrete, 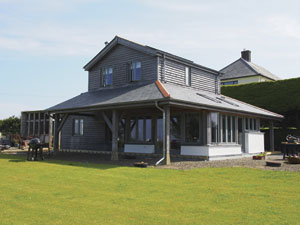 with additional thermal mass provided by a deeper-than-usual concrete floor slab and slate floor covering in the open-plan living area. The roof is insulated using wood-fibre insulation panels. Being in an exposed location close to the Atlantic coast in north Cornwall, Bob and Tally have sensibly used a larch rain-screen cladding over the hempcrete on the exposed walls (most of the house); on the south side, they used a breathable render. Bob’s motto for the build was ‘Low-tech – high performance’, and this comes out in the solidity and strength of the materials that surround us as we stand in the kitchen: oak posts and beams, solid black slate flooring, black slate windowsills, lime plasters and thick hempcrete walls. The house, on a scorching July day, feels reassuringly cool and comfortable, despite the fact that we are sitting next to the large south-facing windows and the external doors are open, allowing a direct connection with the heat outside.

In the winter, heating is provided by a wood burner in the living room, the flue of which passes through the master bedroom on its way to the roof, allowing the passive transfer of heat into the bedroom. There is a solar domestic hot water system, and an air-source heat pump to supply underfloor heating, but Bob and Tally find that they hardly ever need to use it. Even in very cold winters, the heat from the wood burner alone is more than enough to maintain a comfort­able temperature throughout the house “at least 90 per cent of the time – and to be honest a lot of the time we probably have it on for the atmosphere rather than heating. The only time we turn the heating on is when we’ve got guests in the spare bedroom and we feel we should heat up the ‘north wing’ for them,” says Bob.”

Continue your hempcrete journey at www.greenbooks.co.uk/the-hempcrete-book

Sally Morgan's book 'Living on one acre or less' is now available in French through publishers Terre Vivante. Congratulations!
We agree - spot the bumblebee on the winter clematis outside the office. https://www.theguardian.com/environment/2022/jan/19/small-gardens-vital-as-big-ones-conserving-bees-bristol-university-study?utm_term=61e8ec53ac83a81938ee24ff2deb4078&utm_campaign=GuardianTodayUK&utm_source=esp&utm_medium=Email&CMP=GTUK_email
Another instalment on our blog. Go over to greenbooksblog to find Mike and Yvette preparing to plant their meadow.
Ever eaten day lilies or hemerocallis? Go over to our blog for how to cook them with a delicious recipe from 'Food from your Forest Garden'. http://ow.ly/wAWp50FpcTg
Loading Comments...
%d bloggers like this: