So what might a winter garden contain in the way of vegetables for harvesting between about December and April? Here I offer some ideas to help you imagine what is worth growing, in four categories according to how much space and protection each vegetable needs. The first four vegetables and some of the salad plants too belong to the same plant genus called Brassicaceae, the cabbage family. Their attributes that interest us most in winter are the ability to resist frost and continual wetness, and bein 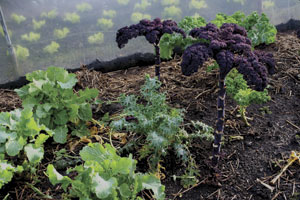 g able to make new leaves in weather that keeps most vegetables dormant. Remember that successful winter harvests depend on the soil being in good condition, with sufficient organic matter and good drainage. I have found that this is best achieved by surface composting without any digging or cultivation – see Chapter 3, pages 32-8, for advice on soil.

Some salad plants, although making little new growth in winter, are able to resist most frost and keep their leaves in reasonable health outdoors. Corn salad (lamb’s lettuce) is the most reliable and maintains a lustygreen colour at all times. Land cress is equally hardy but suffers more from slugs and birds. Winter purslane resists frost and pests but sometimes discolours in midwinter.

If some protection can be afforded, especially for salad plants, the possibilities for new growth are multiplied many times. In the severe weather of early 2010 I had a cloche full of lettuce, rocket, mustard, endive and chicory, which endured temperatures of -15ºC (5ºF) and long spells of dull, wet weather. By March they were nearly all growing stron 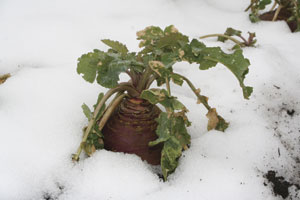 To start your journey to a winter garden today, go to www.greenbooks.co.uk/how-to-grow-winter-vegetables

Sally Morgan's book 'Living on one acre or less' is now available in French through publishers Terre Vivante. Congratulations!
We agree - spot the bumblebee on the winter clematis outside the office. https://www.theguardian.com/environment/2022/jan/19/small-gardens-vital-as-big-ones-conserving-bees-bristol-university-study?utm_term=61e8ec53ac83a81938ee24ff2deb4078&utm_campaign=GuardianTodayUK&utm_source=esp&utm_medium=Email&CMP=GTUK_email
Another instalment on our blog. Go over to greenbooksblog to find Mike and Yvette preparing to plant their meadow.
Ever eaten day lilies or hemerocallis? Go over to our blog for how to cook them with a delicious recipe from 'Food from your Forest Garden'. http://ow.ly/wAWp50FpcTg
Loading Comments...
%d bloggers like this: